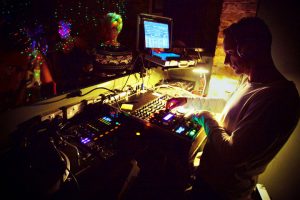 We ALWAYS have a very friendly crowd. Age wise the majority are between mid 40s to mid 50s but a few in their 30s and some in their 60s.
At every single event there have been more girls than guys and there’s never been a fight in the 18 years of staging Groovers Korner events.

Serving up delicious soulful grooves for the music connoisseur’s.

Clubbing In The 80s

In the eighties probably the most popular music of the day at nightclubs was the soul/jazz-funk scene with artists such as Luther Vandross, Loose Ends, Cameo, George Benson and many others all having major hits in the national charts. Those into going clubbing at that time, in this area, would frequent such places as Oscars, Scamps, Bogarts, Crackers, Ritzies, Batchwood Hall, 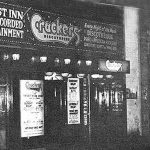 Options, Tudor Rooms, Paradise Lost, Bananas, Hombres, Le Beat Route and Samantha’s to name a few (a list that is likely bringing back lots of fond memories for many reading this!).

For those of you now reminiscing of those days and that great music scene you can re-live those memories! On Friday July 21st @ The Bushey Sports Club for a night called Groovers Korner. Music on the night will consist of mostly 70’s and 80’s soul, jazz-funk, rare-groove, funk, modern-soul and a touch of lovers-rock for those that were into that great reggae scene in the 80’s. There will also be a fair smattering of 90’s R&B/Swingbeat and acid-jazz plus a couple of the higher quality more recent Soulful-House, R&B/Neo-Soul tracks.

The origins of Groovers Korner

Groovers Korner nights have been taking place all around north and west London since around 1999 or so in various venues with the DJ Tony “The Eskie” Winyard, plus various guests DJs. The Eskie used to regularly DJ at

clubs such as Le Beat Route , Oxfords, La Vie En Rose & Hombres in the 80’s and more recently some of the legendary Caister Soul weekenders and various soul-all-dayers.

Although many of us look back fondly on those clubbing days of the 80’s, the less savoury side were the frequent drunken brawls in many of them; something that seems to go hand in hand with men in their late teens and twenties. Well most of that generation are now in their forties and fifties and have calmed down somewhat! Consequently one of the best features of the Groovers Korner club nights is the amazingly friendly atmosphere. Everyone there is out simply to have a good time, catch up with old friends and dance the night away. At many recent event at times during the night everyone in the club was on the dancefloor dancing and singing their hearts out. The age range of the crowd is mostly 35 to 50 but the Groovers Korner nights also attract a surprisingly high number of younger people who are into that music scene and love the far friendlier environment than that is found at most clubs nowadays. So time to get your dancing shoes on and head down to our new venue for a great night of music and fun through until 1.00am with Groovers Korner.

The next event is TBC

Comments or questions are welcome.